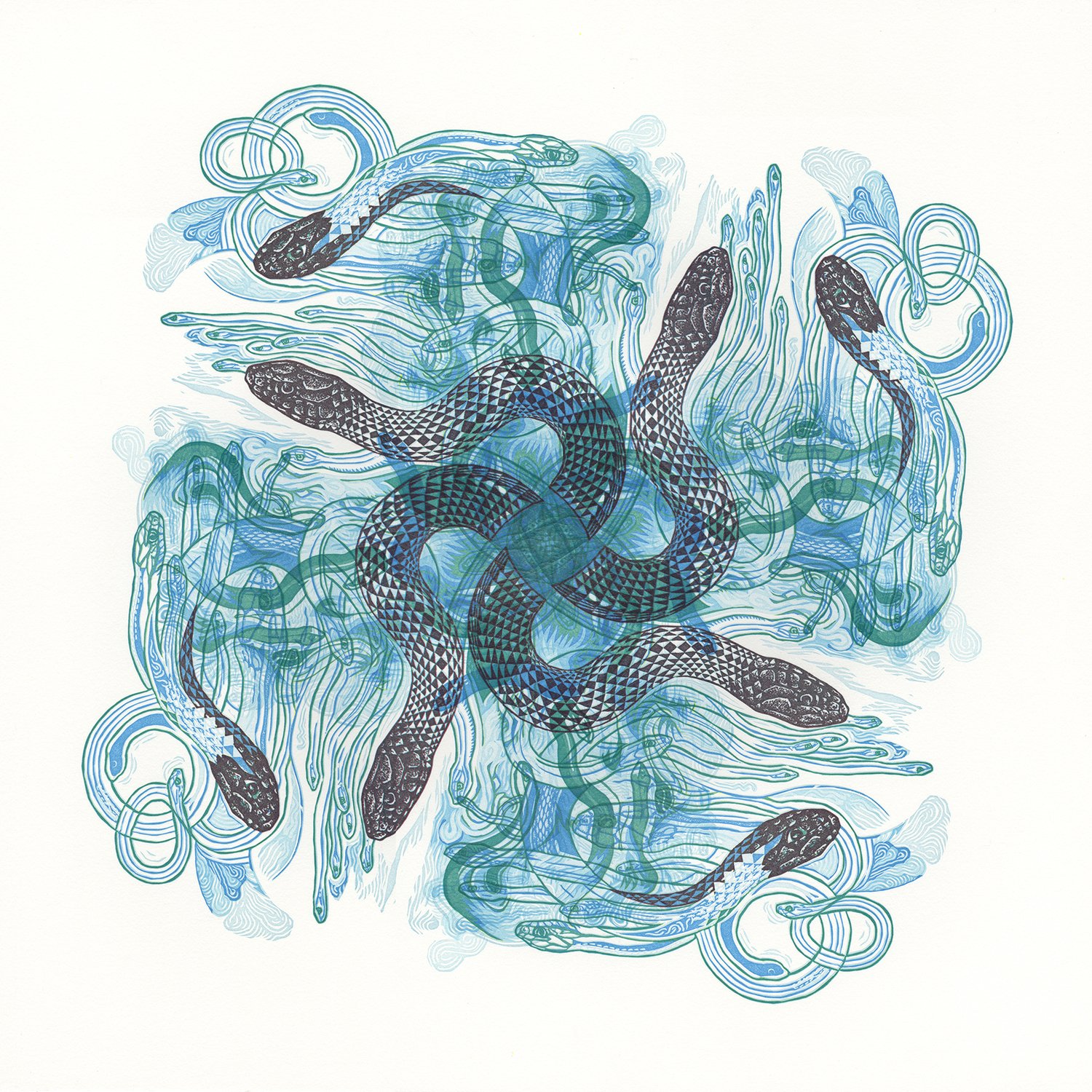 This piece was created for my exhibition, “Transcendence by Observation,” which showed at the Utah Museum of Contemporary Art in the spring of 2019.

It’s a long one, but you know the story: you used to be afraid of snakes. You met snakes on the road while working in the Red Butte Research Natural Area. For the first meetings you were consciously cautious. One evening you met a small garter snake. This snake had bright yellow eyes with big black pupils that looked your cat’s eyes. You knelt down and said to the snake, “Your eyes are like Hazel’s.” This familiarity altered you. You said a few more words to the snake. You talked to her as though she was one you felt affection for: because you did. Then a strange thing happened: you heard and felt heartbeats from the surroundings. They were bigger than you. So you left.
.
After that, you only wanted to create work about snakes. But you assumed that the folks on the other end would not be happy if you produced a series of paintings of snakes: you were working on grant-supported paintings of the wildlife of Red Butte Creek. So, you left it to two paintings of snakes.
.
You decided that after you completed your foreseeable obligations, you’d create as much work about snakes as you wanted.

.
Remember your long existential crisis? Seems like it lasted years. It was when you went to your brother-in-law’s Big Lebowski birthday party dressed as a nihilist and it felt like an apropos costume. It was when you’d only find right-handed gloves. It was when you got upset if you missed the sunset. It was when you’d go for long runs in the hills releasing more and more of the pressure of enclosed spaces the further you went—you never wanted to return home except when you got too hungry. It was the teenage angst you thought you’d left behind. It was when you tried to examine your desire to be and live as another species. Well, at least examined the yearning in the way you could: from your peripheral vision.
.
Not that you were all moody-blues. You found joy in it too. The joy was profound. Revelry in the way you experienced the world.
.
I hope you don’t embarrass yourself by sharing this. If you do get embarrassed, it’s okay. Good luck.

During that lingering bout of angst, your mother asked if you could feel the earth’s love of you. You were not moved. You replied: “No, no I cannot feel it.”
.
Then one day while you were running you felt what mom asked. You felt it from the trees. You felt it from the sky. Yes, especially the sky. The feeling from the sky was similar to what you felt when you were with the garter snake in the Red Butte Research Natural Area.
.
So you expressed it. You created work about the *flow* you felt.

**If you live in Salt Lake City and would like to arrange a local pick-up/drop-off enter discount code: IMLOCAL at checkout to waive the shipping & handling fee.